It keeps raining but then clears for a bit and the jet engine track driers come out to do their thing.  (Quite a sight to watch on its own - these trucks have actual jet engines that very effectively blow the water off the track.)  But it rains again and we think about leaving because it looks ominous.  There is such a small chance this rain will stop for long enough to get the race started - but we just can’t bring ourselves to leave.  We are caught up in the excitement of this, the granddaddy of US car races.   There is another break in the rain and they again bring out the amazing jet engine fleet. They finally do call the race around 4:00 pm and so we reluctantly call it a day.

This is the first time in its 54-year history that the Daytona 500 has ever been postponed.

NASCAR (National Association of Stock Car Auto Racing) is truly a main stream American sport.  Stock car racing has its roots in prohibition times when bootleggers needed to outrun and evade the police as they distributed their product, much of which was made in the Appalachian area of the Carolinas and Georgia.  After the repeal of Prohibition the cars were still used to evade tax collectors.  Eventually, the actual beach at Daytona became the preferred locale for car owners to show and race these cars whose performance was constantly being improved.

It has been fascinating watching the Nationwide race on Saturday and then on Sunday being part of the build up to the Daytona 500.  Lenny Kravitz is the pre-game entertainment, the band Train’s front man Pat Monahan sings a beautiful rendition of The National Anthem, the U.S. Air Force Thunderbirds do their very cool fly-over of the stadium, Jane Lynch from Glee is here as the Grand Marshall (“Lady and Gentlemen, start your engines…”).  It is hard not to get totally caught up in the excitement.


You won't find President Obama at these NASCAR races but Rick Santorum sponsors a car for this race -  it isn't actually in the race but it has his name prominently displayed and the car itself is perfectly positioned in one of the open garages for all to see.   And not to be overshadowed, Mitt Romney is on site for the race and shaking hands with all the fans.  But he ruins the moment when he says he isn't as ardent a supporter as some of the fans here but he has some great friends who are NASCAR team owners... Mitt, Mitt, Mitt, won't you ever learn!

What strikes me most about NASCAR is that these race drivers and their crews are incredibly responsive and beholden to their fans and spectators.  And what a marketer’s dream!  The main sponsor of each car is featured prominently on the car, the driver and crew’s clothing, on the team’s giant 18 (or some big number) wheelers that haul the cars and equipment from track to track, and on those cute little collectible matchbook cars.  Go-Daddy, M&M’s, Oreos’, Budweiser (of course), 3-M, Target, US Army, and on and on.   I think the M&M artwork on the car and it’s corresponding 18? wheeler is the absolute cutest! 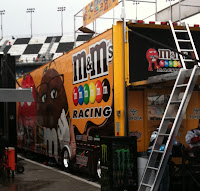 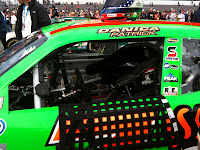 The Nationwide series represents the middle rung of the NASCAR races for up and coming competitors who aspire to be Sprint Cup drivers.   Many "Sprint" Cup Series (the top rung of the series - like the Daytona 500) drivers will race in the Nationwide race (which is typically the day before the Sprint Cup race) to get a sense of the track and hone their skills.  At the start of the Nationwide race on Saturday crashes begin in the first lap.  It seems a bit like bumper cars at the amusement park.  The first crash or two I am quite horrified but then am quickly educated by those in the know on the up-to-date modifications on the cars to protect the drivers.  Drivers in their interior “cages” very seldom get hurt but the cars are often too damaged in the crashes to be able to continue the race.   This sport is a bit like bike racing – driver’s need to work together to help win this race and others in one’s “team” will push a car to increase its speed.  The team concept is a bit confusing since each car can have many sponsors and some sponsors have more than one car.

I have gotten the impression that Danica Patrick, the driver of the Go-Daddy car and the only woman to start in this year’s Daytona 500 – is looked on as someone who can bring in a new generation and a whole new set of fans to NASCAR.  You may have seen Danica in the Go-Daddy Super Bowl commercial having her body painted.  Expanding the fan base has become an important goal as sponsorships and the fan base has fallen off a bit in recent years.  But I get the feeling that loyal fans are not too comfortable with these changes that the powers to be at NASCAR feel are necessary.  "Will diversity spell the end of NASCAR"? is a common lament.  And some seem upset that Danica - a relative novice to the sport - is getting so much attention.

NASCAR has certainly come a long way from car buffs racing their newest revved up car on the beach in Daytona to this highly commercial marketers dream of a sport.

We hear the race is scheduled to go on tomorrow night as long as the rain holds off.  Alas we must leave Daytona but will most certainly be watching the race on TV and are looking forward to it.  Who would have thought?

Addendum:  The race did go on and delivered in the excitement category.  Crashes started as early as Lap 2 and this first one caught Danica Patrick, unfortunately ruining her Daytona 500 debut.  Another car late in the race crashed into one of those amazing jet engine blower trucks carrying 200 gallons of kerosene.  This crash caused a two-hour delay while the track was cleaned of the jet fuel.  The winner's purse is around $1.4 million.  Even the second place winner comes up with more than $1 million.
Posted by Travel Size Mom at 9:05 AM