As I am heading towards the Austin City Limits theatre for their 11:00 am tour, I do a double take as I pass a life size cow sculpture outside the Three Forks Steakhouse.  Well, what an appropriate addition – a cow outside a steak house - interesting and eye-catching.  Although I think I’m glad it was not on site when we ate here last year - too much of a connection with the real thing perhaps for me.

I wander on and there is another cow sculpture – this time with a football motif.  Well this is University of Texas territory.

But then I pass “Flowerida Cow”.  What is going on??

But I need to get to the theatre in time for the tour so I decide to come back later to check out the “Texas Moosicians” cow strategically placed at the entrance to the ACL theatre.

Every weekday there is a free tour at 11:00 am of this very cool recording studio/theater.  I have not yet been able to attend one of the tapings or concerts but I at least want to see what all the hype is about.   I don’t think I’ve seen anything like this.   Everything is black:  the seats, the walls, and the stage.  There are bars, which you don’t really notice at first as they too are done all in black, right on the stage floor and on each of the 3 tiers of seats.    Apparently no expense was spared on this extremely high tech and state of the art theatre.   And because of its intimacy, all seats should be good.

This music “venue” (this is a unique place - it is hard to call it a theater or a recording studio) hosts 60 to 100 concerts a year plus it is the home of the PBS series Austin City Limits, the longest running music series in American History.   Tapings are done ahead of time:  one of my favorite groups, Cold Play, was taped a few months ago for this year’s New Year’s Eve show.  Tickets for the tapings are quite difficult to get, concerts are much easier.    But at the very least  I highly recommend the tour!   Austin City Limits at the Moody Theatre (the official name of this site) is just one more indication that Austin has pretty valid rights to holding the title of music capital of the world. 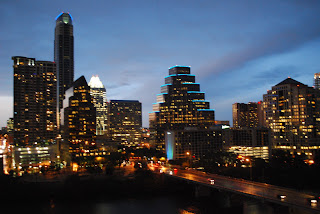 (I find out later that Cow Parade Austin is hosting 74 individually painted cows in and around Austin.  They will be auctioned off for charity on Nov. 13th at the ACL theatre. These cow auctions have been done in many cities for charity.  It is an interesting concept for some special "cow related" places.