If you really, really, really! concentrate and get to your inner self and use your imagination you might feel a bit of the funky, laid back, American writers in Paris in the 20’s feel if you skirt the masses, stick to the back streets, avoid weekends and high season, and tour Ernest Hemingway’s house.   And it is quite pleasant to eat in one of the many open-air Caribbean style bar-like restaurants.  And I suppose the hordes and busloads of tourists carousing and shopping and eating their way ala Las Vegas and New Orleans is just an evolutionary jump but one that I wish hadn’t been made.   I will try to find movies filmed in Key West during a more “traditional” time period and just pretend.   (The Rose Tattoo, Beneath the 12 Mile Reef, License to Kill, PT 109, perhaps will take me back.) 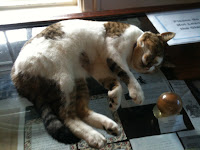 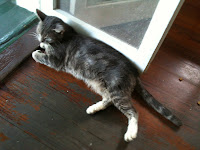 However, if you go:  Like New Orleans and Austin, Texas, I have a feeling there are some real gems to be found if one concentrates on music and investigates and checks out the various bars and restaurants with live bands and performers.  And as I’ve mentioned, Hemingway’s house is fascinating and the tour is a must do.  There are 40 cats in residence and many are descendants of the original six-toed (or polydactyl) cat named Snowball, which was given to Hemingway by a ship captain.   Apparently six toed cats were considered good luck on ships. These cats roam the property and seem to own the place.

The Conch Republic Seafood Company overlooking the docks right in the middle of town is a great stop for lunch. Good food and atmosphere. 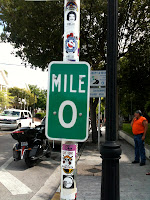 I highly recommend the tours at Monticello.  On our recent visit the guide was fabulous – engaging and poignant and obviously a scholar and admirer of Thomas Jefferson.  We were almost crying at the end of the tour.   The tour guides do an excellent job of presenting the environment in which Jefferson and other southern landowners lived and the contradictions and nuances of the institution of slavery in the south.

The countryside around Monticello is lovely especially in this fall season and there are so many interesting stops in close proximity.  After visiting Monticello, we continued on down the road a few miles on Route 53 to Jefferson Vineyards for a short picnic, then on a few miles more to Ash Lawn, President James Monroe’s home (he used to visit Jefferson by horseback), and then just a few miles further to Trump Winery to see what the new Trump owners have done to the beautiful former John Kluge Estate.  The wine is not very good (our opinion only…) but the setting and the tasting area is lovely.  We did not get a chance to visit Dave Matthews' (yes the singer) vineyard - Bleinheim Vineyard -  right around the corner.   Next time.

For dinner - Hamiltons' on the Mall in downtown Charlottesville is excellent. The menu changes often to take advantage of fresh and seasonal ingredients.  My blue-plate vegetarian plate was perfect.  (I feel that any restaurant that can do a tasty and elegant vegetarian entrée definitely has a leg up on competitors.)  The crab cakes with pickled okra and crispy bell pepper polenta was memorable.  And Charlottesville’s downtown pedestrian mall is quaint, charming, lively and fun with cute boutiques and shops.

Posted by Travel Size Mom at 10:41 PM No comments: