Buddakan, another restaurant in the STARR Restaurant group (Pod, Alma de Cuba) has a wonderfully dramatic ambiance.  I grow increasingly appreciative of  Stephen Starr’s talent as we try more of his restaurants and look forward to trying as many as possible of his 27 of so locations in Philly, NYC, Atlantic City and Florida.  Buddakan must be one of his most successful undertakings as he has opened Buddakans in NYC and Atlantic City. 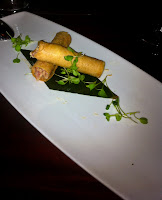 I suppose we could try out NYC's Buddakan for lunch tomorrow.  Train travel in this north-east corridor of the U.S. is astounding.  We could walk to Philadelphia's 30th Street Station, also known as Penn Station, and get to NYC in 1 1/2 hours max.  Arriving at New York City's Penn Station we would take a cab or an easy walk to the Meat Packing District and Buddakan.  Then back to NYC's  Penn Station and return to Philly by late afternoon in time for another great dinner in Philadelphia.


All of these Penn Station names cause confusion for me.  Because the Pennsylvania Railroad company was the owner of the DC to Boston line, there are many northeast cities with a "Penn Station",  including New York City, Philadelphia and Baltimore.  The Philadelphia station, completed in 1933,  is quite beautiful inside and worth visiting even without a train trip.  (The opening scenes of the movie "Witness" were filmed in the station.)

New York's original Penn Station is no longer.... The original structure (1910-1963) was, according to my husband, and from all the pictures I have seen and articles I have read, a breathtaking and monumental entrance to New York City.  Today there is still much angst over the demolition of the terminal building.  Where there was once a beaux arts masterpiece and an architectural jewel, there is now a boring office complex and the Madison Square Garden arena.  Penn Station is now completely underground.   On the positive side, the controversy that resulted from this tragedy prompted immediate conservation efforts and probably saved NYC's Grand Central Terminal from demolition.

The history of New York's Penn Station is a compelling story -  from its beginnings (check out this interesting NPR All Things Considered episode), to its heyday and eventually demise:

So we do not make the train trip to New York this time - we must leave for home this afternoon.  And alas, now I would be too depressed on arrival into New York's Penn Station.  So we instead opt for brunch at Farmicia; and try to pare down, just a tiny bit,  my son's food expectations with a simple but delicious goat herb omelet, breakfast quesadilla,  and bagels with lox and eggs.