Today I want to see what the latest evolution has brought to the Meatpacking District – from slaughterhouses to sex shops to fashion central – gracious! The place must be experiencing some identity issues.   So I put on walking shoes and head back across town through the increasingly busy and increasingly young Murray Hill District, stroll through Times Square, as usual gawking at the spectacular billboards (where is the Calvin Klein underwear model ad that is always here?) skirt the Garment District wishing I knew someone in the know, pass through historic but still a bit run down Chelsea and then finally arrive at 14th and Washington Street in the midst of what I try to envision as a former bustling commercial meatpacking area.  Things are quite calm and quiet - actually kind of nice after the bustle of Midtown.  What I am not seeing is what one travel site describes as:  “West 14th Street, the Meatpacking District’s main artery, has turned into a Rodeo Drive of sorts.”  Uh, I don’t think so.   Instead envision warehouses and old buildings with first floors converted to a series of stylish small boutiques and restaurants.  The new,  hip Standard Hotel is a bit of a landmark and while I’m sure the hotel is a great addition to the area, the building itself reminds me of a 1950’s badly done low-rise office building in a suburban strip mall.  Perhaps it is just too hip for me.    However the attached restaurant – the Standard Grill - looks very appealing and I will definitely return at some point for lunch or dinner.

There are however some nice boutiques, the Chelsea Market is worth a trip to the area on its own merits, and there are great restaurants. 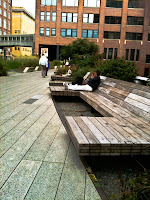 Everyone in the area is very pleased and proud of the newly opened High Line; a mile long elevated linear park straddling parts of Chelsea and the Meatpacking District – from Gansevoort Street to West 34th Street.  The original High Line was built (opening in 1934) to elevate railroad tracks above ground to improve safety on the streets.  Hitherto, with freight trains on the same roadway with horse, motor and pedestrian traffic, 10th Avenue was known as Death Avenue and men on horses would ride in front of trains waving red flags. With the elevated tracks, freight cars were able to connect directly to factories and warehouses and trains would roll right inside these buildings.   By the 1960’s, as rail shipments saw large declines due to interstate trucking, the high line was used less and less and finally was abandoned.   In the late 1990’s efforts started to preserve the High Line and renovate the elevated area as a public open space – really quite an imaginative use!  It does spruce up the area and provides a great place to view the Hudson River.  And there are street vendors, sidewalk artists and the occasional musician trying to make a buck or two.   But I think I have had my fill of the Meatpacking District for at least the afternoon. We will be back tonight for another dinner in the area but until then, off to Eataly to work on my pasta quest.   (to be continued…)